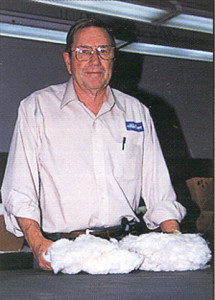 Wendell Wilbanks retired January 3 after 40 years of working for the Cotton Division of USDA’s Agricultural Marketing Service and serving in various roles in the cotton industry.

>He began his service in Austin in 1962 as a classing recorder and then became a temporary field representative in Austin and Lubbock. This led to a permanent field representative position in the Dallas office before transferring to Fresno, Calif., as assistant area director in 1977. He then went on to become the area director in Bakersfield, Calif., before returning to Lubbock in 1986 to serve as area director for the Lubbock classing office. Wilbanks left Lubbock to serve as the grading branch chief in Memphis, Tenn., from 1990-1992 before returning to Lubbock as area director to finish his career.

Wilbanks said the most exciting part of his career was when he returned to Lubbock after working in California. He also said coming back to the Lubbock office after his time in Memphis, Tenn., was just as rewarding.

“It had always been a goal of mine to run the Lubbock office,” said Wilbanks. “Then, I got to come back after my time in Memphis and have that same job again. That was really exciting because you rarely get to have the same job twice.”

Wilbanks has not slowed down much since his retirement. He worked a three- week stint in radio that began the week after he retired and then worked as a consultant for Randy Neugebauer’s political campaign for the 2003 Texas Special Congressional election to replace retiring U.S. Rep. Larry Combest of District 19.

“The best part about my job was the contact with the ginners and producers of the area,” Wilbanks said. “I don’t really have to give that up so I still get to do the fun part.”