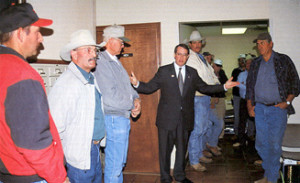 One stop on their agenda was Ropes Coop Gin, and Manager Sammy Means believes the coop was chosen because the representatives wanted to visit with farmers.

“Nearly 40 farmers attended so they could be updated on the latest agricultural legislation issues,” Means says. He also says Ropes Coop’s new convenience store might have been another incentive for the congressmen to visit Ropesville, a town with a population of less than 500 people, because it was financed in part by the USDA Rural and Cooperative Service’s Business and Industry (B&I) program. 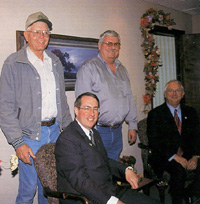 Later that evening, Chairman Goodlatte spoke as the guest of honor at a producers’ forum on the Texas Tech University campus.

In addition to the honor of the political visit, the town of Ropesville was one of three communities awarded a $10,000 Cotton Town USA grant in November 2003 by Bayer CropScience.

Cotton Town USA is part of Cotton Counts, a National Cotton Council consumer awareness campaign aimed at improving the understanding of and attitudes toward the U.S. cotton industry, and led by the National Cotton Women’s Committee.

“We are proud to award this honor to the three towns that have demonstrated a strong commitment to the cotton industry,” says Al Luke, Bayer CropScience insecticides/PGR manager. 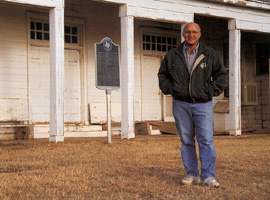 Ropesville Mayor Alfred Thompson says the grant will be used to refurbish the town’s community building. The award also will fund the addition of handicap accessible ramps and facilities.

Jerry Beth Shannon, a Ropesville resident and longtime PCCA member, submitted the Cotton Town USA application. Mayor Thompson says Shannon put a lot of work and effort into the endeavor, and he is glad she takes such pride in Ropesville and preserving the town’s important historical buildings.

“This building is important to the community not only for its historical significance but also because it is the only available meeting place for civic and social events,” Shannon says.