Cotton Market Still Focused on Weather and its Impact on the U.S. Crop

A humorist from the early 1900s once said, “Don’t knock the weather. If it didn’t change once in a while, nine out of 10 people couldn’t start a conversation.” More than a century later, the same holds true for cotton industry observers.

“This is a tough time of year,” David Stanford, PCCA’s vice president of marketing, said in early September. “Weather is a topic of conversation for everyone in the cotton industry since it is a pivotal factor in the direction of prices in the cotton market, especially when the market is almost void of substantial news. Analysts will continue to monitor the weather and crop conditions for the next few months until we know the size of the U.S. crop,” he continued.

The market was taken aback by crop figures contained in USDA’s September supply/demand report prompting cotton futures to hit limit up on Sept. 11, 2003 for the second consecutive day and to close at their highest level in more than two and a half years. 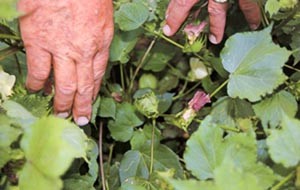 In mid-August, Kansas cotton had bloomed and was beginning to set bolls.

The supply/demand report, based on a field survey of crops as of Sept. 1, placed 2003-04 U.S. cotton production at 16.9 million bales, lower than the 17.1 million bales estimated in the previous month’s report. The figure was slightly less than market expectations due, in part, to the department’s unexpected cuts in the Southeast. Traders had expected to see an increase in production in the region to help offset the crop losses in Texas.

In addition to a shrinking U.S. crop, other supportive elements of the report included an increase of estimated U.S. exports to 12.0 million bales and the slashing of projected ending stocks by 500,000 bales to 3.8 million.

The department’s decrease in the Chinese cotton production figure was made before China’s Ministry of Agriculture released a report Sept. 10 saying it “recognized” that adverse weather will cause a reduction in the size of the country’s cotton crop. According to the report, cotton lint estimates have been cut drastically. Based on the ministry’s data, traders now project a Chinese crop of between 22.9 million and 23.8 million bales.

“This figure, from the world’s largest cotton producer and consumer, was as surprising as a shot out of the dark,” said one analyst. “If the reports from China are true, this could completely reshuffle the world’s supply and demand for cotton.”

Although many cotton market observers agree with the department’s figures as a whole, there still is a considerable amount of uncertainty surrounding the size of the U.S. crop. USDA pegged the nation’s crop at 16.9 million bales in its latest report, but numerous analysts believe the crop could shrink if weather conditions turn dismal.

“The cotton crop was planted late all the way from the East Coast to the Southwest,” said Stanford. “The crop is highly subject to weather damage around harvest time, and there is a possibility of both yield and quality loss if adverse weather hits the crop in the fall.”

As of early September, most of the U.S. crop still looked promising. Crop prospects in the Southeast were better than they had been in several years until Hurricane Isabel blew through on Sept. 18 damaging approximately 50,000 acres of cotton in North Carolina and Virginia. However, the crop in Georgia received excellent rain this growing season, and if weather conditions continue to cooperate through harvest time, farmers could produce 2.0 million bales, considerably higher than the norm for the state. In the far western U.S., there are encouraging prospects for the crops in California and Arizona as well where less pima and more upland cotton was planted this season.

Cotton production in the southwestern cotton producing states poses the greatest concern to analysts. The region has suffered substantial weather-related difficulties this season. In fact, a sizeable amount of cotton planted in Kansas, Oklahoma, and Texas was considerably later than usual, and much of the crop was further hindered by a lack of moisture during peak growing periods.

Although there are bright spots in many parts of the Texas High Plains, the state’s largest cotton producing area is expected to produce less cotton than it has in past years. Meanwhile, the South Texas crop, the first off the stalk in the United States, is of excellent quality.

“The South Texas cotton we’ve handled this year has been of superior quality and strength,” Stanford explained. “It certainly will meet the demand in the present marketplace and will not be difficult to move. Conversely, we expect the average quality of West Texas cotton to fall below last year’s standards due to a combination of drought conditions and losses in irrigated cotton production which will result in a much higher percentage of this year’s harvest coming from dryland acreage,” he concluded.