Pool marketing is a concept that has been utilized by U.S. agriculture for decades; however, cotton producers in West Texas and Oklahoma gained access to the marketing alternative on a large scale through PCCA in 1987. A year later, PCCA introduced pool marketing for its members in South Texas.

The success of PCCA’s pool alternative is measured by its phenomenal growth in volume of cotton marketed and its rise in popularity among PCCA members. This popular marketing alternative offers producers the opportunity to direct their personal resources to cotton production and leave the marketing of their crops to the cooperative’s sales and marketing team. 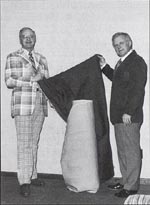 The 1987 acquisition of the ACG denim mill is viewed as one of the most significant developments in PCCA’s history. The transaction also pumped more than $100 million into the West Texas economy at a time when capital for many farming operations was badly needed. More important, PCCA’s ownership of the mill ensures the continued operation and cooperative control of this region’s valuable asset.

“Traditionally, PCCA’s profitability hinged on the volume of cotton produced and marketed through the coop by its members; therefore, profits at times have been at the mercy of the weather, government farm programs and mill demand,” PCCA’s past president and chief executive officer C.L Boggs said in July 1987. “That tradition may be on the verge of extinction with the addition of the denim manufacturing facility,” he added.

Heavyweight denim was in short supply in 1975, but West Texas cotton was plentiful. Growers were eager to have a new outlet for their cotton, and Levi Strauss & Co. (LS&Co.) was more than willing to purchase quality denim from ACG. In truth, an agreement with LS&Co. was instrumental in securing the required financing to build the denim mill. For a period of five years, the company agreed to buy every yard of denim ACG could produce that met Levi specifications. That five-year agreement blossomed into a successful 22-year exclusive contract between LS&Co. and ACG. In fact, LS&Co. continues to be the mill’s largest customer today.

Many advances in the textile and cotton industries evolved from the development and growth of ACG. Building a textile mill in West Texas required a different school of thought for architects who primarily built mills in the southeastern United States. Due to the denim mill’s success, several design and building techniques applied at ACG have been included in the construction of other textile mills. 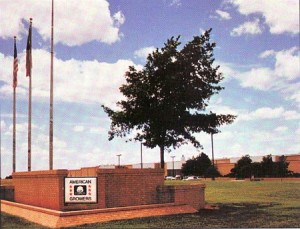 Additionally, a conglomeration of PCCA and ACG staff worked diligently to develop instrument values for selecting cotton for the mill. At the time, the government operated “classing office” still graded cotton manually. A large portion of the technology, developed in part by PCCA beginning in the 1960s, became part of today’s universally accepted high volume instrument (HVI) system of classing cotton. HVI, a mechanical means of cotton classing, eliminated the potential for human error and made the grading of cotton much more consistent.

ACG met its original objectives and exceeded even the most optimistic expectations of its founders. The original building included approximately nine acres under roof located on a 100-acre tract of land. Currently, the facility has grown to include11 acres under roof situated on 155 acres. In the early days, 65,000 bales of cotton were utilized each year and were spun into one style of denim for only one customer, LS&Co. By 2002, capacity had increased to approximately 120,000 bales, and the plant had an available repertoire of more than 85 styles of denim available for order from a growing number of customers.

In an effort to diversify its textile operation, PCCA in 1998 purchased a mill in New Braunfels, Texas. Nestled along the banks of the Guadalupe River, this yarn-dyed, woven-fabrics facility originally was founded in 1921 as Planter and Merchants. In 1972, it became a division of WestPoint Pepperell and was known as Mission Valley Textiles. Through years of both war and peace, the plant steadily swelled to more than 500,000 square feet on a 40-acre site, and grew to be the largest employer in the community. In May of 1998, the mill became a division of PCCA and was renamed Mission Valley Fabrics (MVF).

By 2001, a continuing flood of cheap, imported textiles and apparel from Asia had seriously eroded U.S. markets for yarn-dyed, woven fabrics, and PCCA converted the MVF facility to a spinning, denim weaving and finishing operation. Later, in an effort to adapt to everchanging market conditions, Mission Valley’s newest and most modern weaving looms were relocated to ACG. Several open-end spinning frames also were relocated.

Currently, a carefully planned division of labor between the two plants makes it possible to meet the demand for denim. MVF’s product development and capacity to manufacture both ring and open-end yarn and to finish styles that cannot be handled at the Littlefield facility are assets to the cooperative. Specialized equipment at MVF makes it possible to put finishes on fabric that are outside the traditional 02 denim finish done at ACG, thus, broadening the potential for more creativity and flexibility in the division’s textiles.

Van May, PCCA president and CEO said, “PCCA’s strength, long-term experience with denim manufacturing, strong record of customer service and field-to-fabric system of cotton marketing provide a firm foundation. We are positioned for future growth opportunities, and we will maintain PCCA’s reputation as a high-quality, competitive denim supplier.”

A small group of visionary farmers on the High Plains of Texas formed Plains Cotton Cooperative Association to better market their cotton in 1953, yet not even the organization’s founders could anticipate how widespread their influence would be or that the entire cotton industry would feel their impact. It takes many hands to move cotton from field to fabric; thus, many people have been involved in the expansion of PCCA and its services over the last 50 years. The long road to success has not been without its share of bumps and curves, but in the future, PCCA will continue down the path of innovation, cutting-edge technology and resourceful marketing to add more value to its members’ cotton.