A New Perspective on Family Traditions

The Blagrave family in Ackerly, Texas, has deep roots in both farming and tractor pulling. Looking to gain a unique perspective on the two, Trevor Blagrave began shooting aerial videos with a drone.

“I thought it would be amazing to get aerial videos of the different things we do around the farm and with the family tractor pulling hobby,” Blagrave said. “It provided me with a new and very unique view for my GoPro videos that I make.”

The Blagrave family has been farming for multiple generations and like many others, it truly is a family affair.

“Cotton farming is what my family does here in West Texas,” Blagrave said. “I come from a long line of farmers. Like many families in this area, we have our good years and our bad years, but we always have each other.” 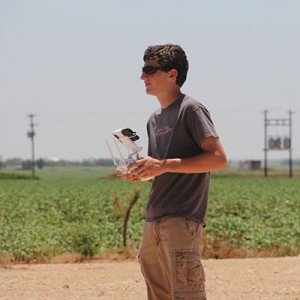 Trevor’s father and uncle, Steve and Stan Blagrave, also tractor pull as a hobby thanks to his grandfather, “Pop” Derwood Blagrave, starting the tradition in the family.

“They have become successful in pulling on a national level,” Blagrave said. “This hobby helps us on the farm. All of the mechanic work and fabricating parts can also be applied to the farm.”

Blagrave has been shooting aerial videos for almost two years. He said it took him a year to learn how to shoot video with the drone. Since he started shooting videos, he has shot aerial footage for multiple organizations, including Plains Cotton Cooperative Association. His footage can be found in PCCA’s sustainability video on the website.

“I started shooting many farming videos for myself since it was so interesting seeing the farm from an aerial view,” Blagrave said. “Since then, I have shot videos for some tractor pulls and AP Productions used those shots for a tractor pulling program on RFD TV. Later, AP Productions acquired their own drone after seeing how I used mine. If I’m at a tractor pull, they still ask me to shoot videos for them with their equipment. I have also shot some drone videos for PCCA this past fall before harvest.”

He said he learns new techniques each time he takes flight, but his two favorite things to video are farming and tractor pulling.

“I love to shoot a cotton harvest into the sunset,” Blagrave said. “It gives it a really unique and interesting angle with such beautiful West Texas sunset colors. I also love filming tractor pulling because if you film it just right, the videos are absolutely incredible. The shots are challenging to get, but that makes it fun.” Blagrave also has entered some of his work in various contests.

“Back in early January, I completed a UIL film contest documentary video of the Blagraves in tractor pulling,” Blagrave said. “This project was not a drone project, but it did have some drone shots in it. Last year, I entered a video in a contest for GoPro. I didn’t make it far, but I did receive a 50 percent discount for another GoPro camera.”

He said the next project he wants to work on is putting together another cotton harvest video, but he has been too busy with other school projects to get it finished.

Blagrave currently attends Sands High School in Ackerly, Texas. He is actively involved in many extra-curricular activities. In the fall, Blagrave plays 6-man football and runs cross country. The past two years they have won their region and qualified for the state cross country meet. He also plays basketball and participates in track and field, and he has competed in the UIL film competition. He also stays active in FFA.

“I’m involved in FFA, competing in radio, chapter conducting, speech and other contests,” Blagrave said. “The last two years I have participated in ag mechanics. Last year we restored a tractor, and this year we built a hydraulic lift trailer. We competed with the trailer in the contests at San Angelo and San Antonio.”

Outside of school, Blagrave said he enjoys off-roading in his Polaris RZR while filming fun shots with his GoPro. He also is starting to tractor pull more with his family.

“I am starting to get more involved in tractor pulling since I am getting to drive our two-wheel drive pulling pickup, the “Wild Horse,” which of course, usually has a GoPro on it,” Blagrave said. “My other hobby is filming and putting videos together.”