Mother Nature always seems to be a topic of conversation among the cotton trade by mid-summer, and 2001 has been no different. Some areas in South Texas have adequate moisture while much of the rest of Texas, Oklahoma and Kansas are struggling – waiting for Mother Nature to bring the rains.

The Corpus Christi area was at a crossroad at the end of May. Moisture was adequate in most of the area, however, there were some dry spots. By the end of June, many areas were stressed, and rain was desperately needed. Don Clary, manager of PCCA’s South Texas operation in Corpus Christi said, “Things were looking good in May, but more rain was still in need.” 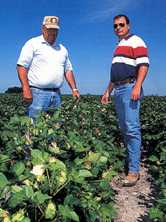 The Rio Grande Valley area was extremely dry until rain came at the end of April, but no one knew how long that moisture would last, said Clary. The month of June brought that scenario to realization. Some areas were beyond repair from the drought while other areas had a good amount of moisture. With this moisture, though, came an invasion of weeds. Also, as spring moved into summer, heat began to take its toll on the blooming crop. Drought, however, has not been a problem in the Upper Coastal Bend.

Good rain fell in the El Campo area at the end of June, leaving some areas too wet. Ropollo said the daily rains at that time needed to stop to avoid boll rot. One more general rain in mid-July followed by dry weather for two months would help the crop finish out the season.

“There was good underground moisture, and it showered on what came up,” Gwinn said. “Things are looking good so far.” Acreage could be down 10 to 20 percent in the area due to alternative crops like corn and sorghum, Gwinn added.

“This year’s crop could be better than last year due to the July 1 rain. Last year, we didn’t get that rain, and the soil got dry near the end of the season,” Gwinn said.

Some areas did not have adequate moisture and had to wait for a good rain in order to plant. This was the case in the Big Spring and Midland areas, however, the Sweetwater and Haskell areas had a good amount of moisture for planting.

Gary Setliff, manager of Rolling Plains Cooperative Compress (RPCC) in Sweetwater, said, “Many cotton farmers in this area do not care to start planting too soon; some wait until June 1.” Area moisture at the time was much better than last year, however, that can have its downfalls.

“Generally, the more rain you get, the more insects you have,” Setliff said. Farms with more moisture could have trouble with armyworms, however, the worms seem to be cycling out of the area. He also said that, due to the Boll Weevil Eradication Program, weevils are no longer a major problem. This year, there has been more damage from wind and blowing dirt than insects, Setliff added.

Through June, lack of rain seemed to be the biggest concern in the Rolling Plains. The Big Spring area and north were very dry, and some re-planting was necessary. Meanwhile, the Colorado City and Snyder areas reported most crops were in various stages of growth at the end of June.

“I think we will have more cotton produced this year due to the crop holding on better because it is not as hot as last year,” said Setliff. 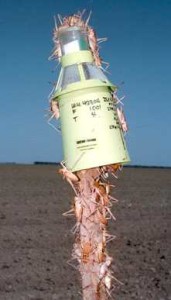 Other factors also have played a role in crop conditions this year. Dan Jackson, Roscoe Coop Gin manager, said hail damaged 4,000 acres in his area, and now there is a grasshopper infestation.

“We had about a quarter of the crop planted at the end of May, but we had to re-plant more than half of that due to the hail damage,” Jackson said. “Each year, it seems, farmers get excited at the beginning of the season, but then it gets dry and that excitement turns to worry. We hope this year is not a repeat of last year.”

Larry Tomlinson, Rhineland Coop Gin manager, said his area had more moisture this year, but it dried out fast because of the wind.

“I think we are starting another drought,” he said. Tomlinson expected the same acreage this year even though there was no dryland cotton last year. He also expected fewer pesticides to be used this year. The farmers do not want to spend any more money on their crop than they have to, he explained.

“We are off to a better start than the last few years, but the lack of rain and the cotton market prices are very discouraging to producers this year,” said Tomlinson.

Hackberry was another area that had to wait for a good planting rain. Hackberry Coop Gin Manager Earl Brown said his community did not receive the same amount of rain as others.

“This area is a little dry for planting, but some farmers are already planting and it is coming up,” Brown said at the end of May.

He expected thrips to be a problem throughout the area with boll weevils being a problem around cities and along the edge of the Caprock. He also said armyworms were a problem last year, however, they were not expected to be much of a problem this year. He also expected acreage to be about the same as last year because there are not many alternative crops for the area.

“The downfall this year is the economy,” Brown said. “No one is trying to make money; they are simply trying to lose the least amount.” One area that had adequate moisture for planting was Lockney.

“We received five inches of rain in mid-May, but by the first of July the wells were beginning to run,” said Lockney Coop Gin Manager Charlie McQuhae. “The crop looks better than we thought it would this year,” he said. 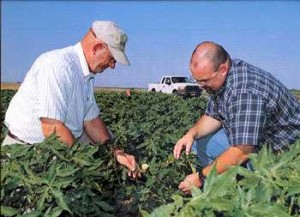 In May, McQuhae didn’t expect farmers to spend money on pesticides early in the season. He thought they would wait to see how their crop does and maybe spray later in the season. He expected final planted acreage to be down 20 percent.

“Some farmers are not planting because of the low price, the economy and the high cost of energy. They are trying to get back to a manageable number of acres,” he said. “If farmers make it through this year, it will make better managers out of a lot of them,” McQuhae added.

To the north, moisture was adequate for planting, however, that moisture was short-lived. Malcolm Magar, manager of Oklahoma Cotton Cooperative Association in Altus, Okla., said most of the irrigated cotton was planted and about half was coming up and looking good at the end of May. However, the dryland crop was planted late and didn’t come up very strong. The last rain the area received was at the end of May, but acreage seems to be up slightly in the area, according to Humphreys Coop Manager Jay Cowart.

“They may have been a little ahead of schedule in May due to the good rains, but some had to be re-planted up to three times. Some producers started watering in mid-June, and others will start by July 4,” Cowart said on July 1.

“We haven’t lost many acres in the last three or four years,” said Cowart. “The irrigated acreage is usually consistent while the dryland changes a little.” Thrips were a small problem at the first of the season, but there was little pesticide spraying, he said.

Gene Latham, general manager of Southern Kansas Cotton Growers, said crop conditions in his area do not look as good as they did last year, and he is hoping that it ends better than last year. However, rain is not a big concern for this area.

“Some of the cotton looks great and other parts are really struggling,” he said. Some spraying for worms has occurred in the area due to cutworms early in the season, said Latham. Also, he has seen garden webworms in cotton for the first time this year.

The physical crop conditions for 2001 seem to depend on the location. However, it is the other factors of producing cotton that farmers are worried about. They believe they can produce a quality crop, but they do not believe it will be worth much when it is time to sell.