As the climate in the agribusiness world becomes exceedingly hostile, local cooperatives are discovering new and inventive ways to increase earnings, distribute larger dividends or provide additional services to their members. 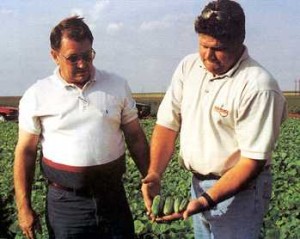 The cotton market can be fickle; therefore, producers often seek alternative crops in an attempt to increase their profits and limit costly inputs. Fiber- Tex Coop Gin near Brownfield, Texas, has found a way for its members to capitalize on the harvesting of cucumbers, now one of the popular alternative crops in the area.

Cucumbers are almost commonplace near Brownfield after Hartung Brothers Inc., a vegetable company from Arena, Wis., entered into contracts with producers in Terry County and the surrounding area to grow the crop.

Representatives of Hartung Brothers plant and harvest the cucumbers. Growers are responsible only for irrigating the crop, making it an attractive alternative for farms with adequate irrigation. Cucumbers, which are planted in June, are a 45-day crop and often can be double-cropped if irrigation water is available. Because cotton in the area also is planted in June, the two crops frequently share an irrigation pivot.

“We built the cucumber shed as a service to our existing members and to entice new customers,” says Bobby Moss, Fiber-Tex Coop Gin manager. “The shed is self-sustaining, and no money comes out of the members’ pockets. After the facility is paid-off, our members will profit from the operation,” he adds.

The vegetable company and gin have no trouble sharing the gin yard as the cucumber harvest is complete when cotton is coming off the stalk. In fact, Hartung Brothers opens its office at the cucumber shed on July 1 and employs local workers who often obtain jobs at the gin when the seasonal operation closes in mid-September.

The arrangement has worked equally well for the companies, and both parties anticipate a continuation of their relationship for quite some time.

“Producers in the area grow cucumbers of exceptional quality, and demand for cucumbers from the area is growing,” Jim Nottner of Hartung Brothers Inc. says. “Our relationship with Fiber-Tex has been outstanding, and we have been incredibly happy with the arrangement and look forward to working with them in the future,” he concludes. 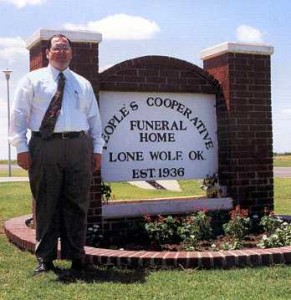 In 1936, Lone Wolf Planters Coop in Southwestern Oklahoma added a funeral home to its list of assets. The sequence of events was set in motion when William Kosanke, Lone Wolf Planters Coop manager, lost his daughter in a house fire. He and his wife were surprised by the high cost of a funeral. Therefore, when Lone Wolf Funeral Home was offered for sale, he suggested the coop purchase the business and, as a service to the community, operate it at cost. The idea eventually was well received by the coop board members, and the coop entered the funeral business, renaming it People’s Cooperative Funeral Home.

At first, the coop venture was not welcomed by the funeral industry. People’s experienced difficulties buying equipment and supplies for many years after its inception. Companies would deliver caskets only in the middle of the night, and many equipment and supply orders simply disappeared before being filled.

The funeral home originally was operated out of the funeral director’s residence, however, the business soon outgrew the location. Consequently, the gin office was divided, and the funeral home moved into one side. The sign on the coop building read “Planters/People’s Coop.”

“The locals didn’t give that sign a second thought, but strangers driving through town got a good laugh,” Bill Kosanke, son of the late William Kosanke and past Lone Wolf Coop board member, reminisces.

“Some people had a problem with paying their coop bill on one side of the building and then wandering into the funeral home to view their loved ones. So, we moved the funeral home across the street in 1976,” Kosanke explains.

A new facility was built in 1996, and 145 services were performed in 2000 – a far cry from the 17 services recorded in the 1936 coop books. The funeral home now has a large trade territory, and news of its reasonable prices has traveled far. Jay Hunn, the funeral director at People’s Coop Funeral Home, has performed various funeral services for clients from Oklahoma City to South Texas. The business operates with a small number of employees to keep overhead costs down. The funeral home has two full-time employees and five to seven part-time workers as needed.

“Many times, our prices are half of what you would pay at another funeral home,” Hahn says. “Families appreciate the fact that we offer a quality service with outstanding care, and they return to us the next time they are in need.”

“It’s just like any other coop. If people aren’t saving money, they won’t use it,” Kosanke adds. “We aren’t into white-gloved pallbearers and a line of limousines, and people don’t expect it,” he concludes.

The Board of Directors at Crosby County Fuel Association entered into the venture only after extensive research. The fuel association studied the feasibility of the project with the help of Country Energy LLC, a company formed by two of the United States’ largest farmer-owned cooperatives: Cenex Harvest States (St. Paul, Minn.) and Farmland Industries, Inc. (Kansas City, Mo.).

Country Energy offers a full-range of products and services to marketers considering a CENEX/AMPRIDE convenience store facility. The business provided assistance with site selection, suggested a building size and layout, and helped define petroleum and in-store equipment needs. In addition, the company offered retail training that spanned all facets of convenience-store operations and assisted Crosby County Fuel Association in choosing an appropriate mix of products and services.

The stores opened in February and March of 2001, respectively, and carry a wide range of products. In addition to convenience items and fuel, the CENEX/AMPRIDE location in Crosbyton also contains a Noble Roman’s Pizza Parlor and a Taco Bell. The Ralls location is home to a Pizza Hut and TCBY Yogurt.

“The fuel business is picking up as truckers and travelers hear about our stores, but the restaurants have been far more successful than the coop had anticipated,” says Monty Bevel, Crosby County Fuel Association’s general manager.

Despite extensive research by the coop board and the advice of seasoned professionals, the stores were not ready for the influx of food orders they received in the first month of business.

“We made 350 pizzas a day at our Pizza Hut the first two weeks we were open, and lines extended out the door,” David Henry, Ralls CENEX/AMPRIDE manager says. “In a town with few eating choices, we offer four fast food restaurants within eight miles of each other; however, we never anticipated that customers would come from as far as Spur, Dickens and Floydada,” he adds. Bevel is pleased with the progress the stores have made in such a short time.

“We have a lot to learn about being in a non-ag business, but we are catching on fast,” Bevel says. “We’re really happy with our new operation, and we expect it to be profitable,” he concludes. 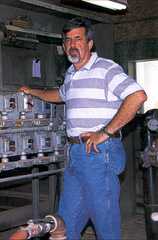 In a joint venture with Farmland Industries, 10 High Plains cooperatives joined together to open a coop fertilizer plant in 1997. Frontier Fertilizer and Chemical, with locations in Hurlwood, Texas, and Seagraves, Texas, supplies liquid fertilizer blends and solutions to members as well as independent dealers on the Texas High Plains and Eastern New Mexico.

A management committee comprised of representatives from several of the 10 member-cooperatives operates Frontier Fertilizer. The venture consists of a diversified mix of cooperatives including Lockney Coop Gin, Crosby County Fuel Association, United Farm Industries in Plainview, and Spade Coop Gin to name a few.

The fertilizer plant specializes in custom fertilizer blends and prides itself in its customer service and prompt delivery. Dry fertilizer, trace elements and potash also are available at the plant. According to Jay Garretson, Frontier Fertilizer and Chemical manager, product quality also is of the utmost importance to Frontier Fertilizer. Consequently, the business has never received a bad report from government fertilizer sample testing in the five years of operation.

“Our fertilizer blends are made to order and include the exact ingredients in the precise proportion the customer has requested,” comments Garretson. The plant has been a great asset to its member cooperatives and has saved them a considerable amount of money.

“We are able to buy ingredients in volume and pass the savings on to our customers,” says Charlie McQuhae, Frontier Fertilizer chairman and manager of Lockney Coop Gin. “Of course, we don’t just service our members. Approximately 40 percent of our business is to independents,” he explains.

“A group of coop managers brought this business idea into fruition, and we are very proud of our operation and its great success,” McQuhae says.

The cooperative system and the thousands of dedicated people who work for it are driven by one central purpose – to help member-producers achieve long-term success. Part of this goal is achieved by providing not only greater profits and larger dividends, but offering quality products and services to cooperative members. As agriculture diversifies, the services and products offered by many local cooperatives will expand as well.