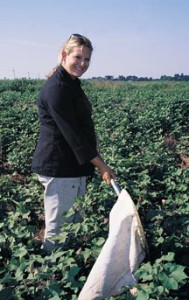 Shelley Kaylor demonstrates the use of a sweep net.

Ginning volume at Southern Kansas Cotton Growers (SKCG) near Winfield, Kan., has increased 500 percent since 1996 with cotton quickly asserting itself as one of the fastest growing commodities in Kansas. As in most cotton producing areas, the success of the producers and the gin is secured, in part, by consistent cotton production. To aid its customers in attaining the highest production levels possible and ensure the cooperative gin’s success in a region still getting accustomed to cotton, SKCG implemented a field scouting and consulting program to assist its producers with pest management.

Gene Latham spearheaded the program when he became the manager at SKCG in 1999. Latham holds two degrees in entomology from Texas A&M University and supervised a similar program at a gin he previously managed on the Texas High Plains. SKCG’s consulting program, now in its fifth year, has been an asset to the participating members at the gin.

In 2004, approximately 11,000 acres or slightly more than 40 percent of the acres serviced by SKCG were signed into the program. The cost of the scouting service is assessed on a per-acre basis, and soil sampling for fertilizer requirements also is offered for a nominal fee. According to Latham, the program is designed to charge producers just enough to cover the expenses of the program.

“We want our producers to be successful, so we’re out every week from planting to harvest…”Shelley Kaylor

“If you do this program correctly and spend as much time as needed in the field, you really can’t make money at it,” Latham says. “However, it’s a valuable service which can positively affect the producers’ bottom line by increasing cotton yields that might have been lower due to damaging pests,” he adds. SKCG member Robert White, who has used the scouting service since 1999, is pleased with the assistance the gin provides. 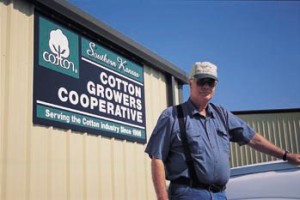 “Having my fields scouted has unquestionably helped boost my yields,” White says. “Gene Latham and his staff are very judicious with the program’s input dollars. It’s most definitely the only way to raise cotton if you’ve never done it before,” he adds emphatically.

The program emphasizes monitoring pest pressure and treating only when necessary. Despite the fact that cotton still is relatively new to the area, the potential exists for many different species of insect pests to attack the crop. Latham says the lush vegetation in Kansas provides a breeding ground for bothersome pests. Thrips, cotton fleahoppers, tarnished plant bugs, and bollworms are a few of the damaging insects common to the area. Each of these pests is capable of causing economic yield loss, and some are capable of totally destroying an entire crop.

“Here in Kansas, we aren’t experienced cotton growers yet,” says SKCG member Vic McClung. “I’ve had the SKCG staff scout and sample soils in my fields for about four years now, and I’ve been really pleased with the program. It’s a very important part of the service the gin provides in our area,” he explains.

Pest populations can change quickly; therefore, cotton insect management is both information intensive and time sensitive. During the growing season, fields must be scouted at least once a week, and sometimes every few days, and accurate estimates of pest populations must be determined by time consuming sampling procedures. Therefore, SKCG’s highly trained scouting team is a valuable resource for its members. 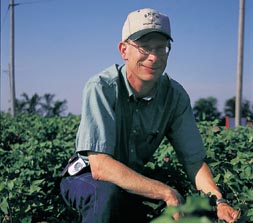 Dr. Rex Friesen, the program’s supervisor and only full-time employee, earned a bachelor’s degree in biology from Cal-State University in Fresno, Calif., and a doctorate degree in population biology with an agricultural emphasis applied to cotton from the University of California at Riverside. He spent most of his career as a county extension Integrated Pest Management agent in Texas and also worked several years as a research entomologist for the U.S. Forest Service in Hawaii. He moved to Kansas, his wife’s home state in 2000, to manage the consulting program for Southern Kansas Cotton Growers.

“Kansas is the last frontier for cotton,” Friesen says with a smile. “I don’t know of anywhere else in the United States where cotton production has grown this quickly and with such great success,” he adds. “Each year presents different obstacles and new learning experiences. It’s an exciting place to be.”

Shelley Kaylor, a life-long Kansas resident, rounds out the scouting program’s management team. She holds a bachelor’s degree in agronomy from Kansas State University and has spent four years as a seasonal employee at the gin. Kaylor, along with her team of scouts, concentrates mainly on the northern area of SKCG’s service area. In the winter months, she and her husband work on their hay and cattle operation. Kaylor, who grew up in a farming family, finds cotton production an interesting challenge.

“Kansas is the last frontier for cotton. It’s an exciting place to be.”Rex Friesen

“Nobody told me cotton was such a high maintenance crop,” Kaylor says. “You can’t just plant it and forget it. We want our producers to be successful, so we’re out every week from planting to harvest with well-trained scouts to make absolutely sure our customers’ cotton is free from infestation.”

SKCG’s program received over 50 applications for scout positions this past season and employs scouts from a wide variety of backgrounds and educational levels. In the summer of 2004, SKCG scout applicants included retirees, housewives, teachers, students on summer break, and one custom harvester waiting for the grain harvest to begin. The scouts are trained in pest identification and sampling and report their findings to Friesen and Kaylor who make treatment recommendations, if needed.

Latham believes the growers taking part in the scouting program are well served and likely will show a difference in cotton production levels due to the staff’s diligent attention to the fields in their area.

“By the time a producer recognizes on his own that he has a problem, it’s usually too late,” Latham explains. “Despite our years of experience in entomology, each year presents new and interesting scenarios. I consider this program an ongoing training process which benefits our growers and our gin.”