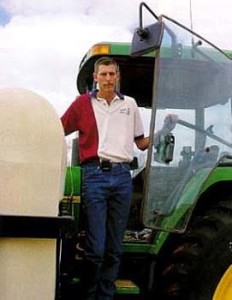 Cotton producers, cattle growers, ag lenders and the many other diversified people that comprise the agriculture industry may be divided by distance, interests and outlook, but all have one thing in common: their livelihoods are dependent upon agriculture’s ability to survive and grow.

In order for this goal to be met, energetic and motivated people must step forward and assume leadership positions to take hold of agriculture’s momentum and direct it into the next century.

Transforming innate characteristics into usable leadership traits is the goal of leadership programs throughout the nation which aim to educate participants so they can in turn work within their community to advance the agriculture industry. The assortment of programs available opens many doors to people willing to achieve growth through hard work.

According to Ralph Huffaker, a cotton producer from Tahoka, TX, and a current participant in the Texas Agricultural Lifetime Leadership (TALL) program, it is the responsibility of young people involved in the industry to assume leadership positions to make the future better for all involved.

“I got involved with the program because I could see a lack of young people going into agriculture, and I knew that for ag to move forward, it would be the young people who had to step up to do it,” Huffaker observes.

The TALL program is conducted by the Texas Agricultural Extension Service (TAEX), an agency of The Texas A&M University System, and it acts as a non- profit program through the support of various agricultural interests and commodity groups. According to Jim Mazurkiewicz, TALL Coordinator and extension specialist, TALL offers the 28 participants in each class a unique chance to gain valuable skills while interacting with people whose backgrounds span a broad spectrum of the agricultural industry.

“When we understand each other, it helps us to better understand ourselves,” Mazurkiewicz says, adding that, “when we can work as one entity we will have more of an impact and a voice.”

TALL is a two-year competitive leadership development program that is made up of seminars with experts, on-site tours, meetings with businessmen and government leaders, international study and personal skill development. It is designed for men and women in the early stages of their leadership careers, usually between the ages of 25 and 40. Applicants must be residents of Texas and working in the agri-food industry. Candidates for application are considered based on many different criteria including their leadership integrity and effectiveness, communication skills and potential for growth. If admitted to the class, a tuition fee of $1,500 is required and can be paid in installments.

Huffaker is proud of the skills he is gaining through his participation in the program and feels confident he will be able to serve his industry in the future through a variety of leadership capacities.

“I hope to get more involved in the cotton industry and be a leader representing the production side of the industry,” Huffaker says.

The curriculum involves nine separate meetings held in different locations across the state and nation over the course of two years. The final trip provides participants an opportunity to travel out of the country and view international agricultural practices. Each class is comprised of 12 members who are between the ages of 25 and 40. Those applying must derive a major portion of their income from production agriculture and be a member of Texas Farm Bureau. Each participant is responsible for two $500 contributions, one for each year of the class, which is matched by at least $1,000 from the local county Farm Bureau.

According to Si Cook, the director of organization programs for Texas Farm Bureau, Ag Lead brings together diverse people with a common purpose of better understanding the field of agriculture to become effective communicators and leaders.

“One thing that sets this leadership program apart from other programs is that it is not commodity specific, so we have a wide variety of people participating,” Cook says.

Sherri Clements, a graduate of the Ag Lead III class and a Sundown, TX, cotton producer, believes one of the most valuable things she took away from the program was how to be an informed communicator in the interest of agriculture.

“This program is important because it shows you the different avenues we have to get our message out to our representatives and the consumers,” Clements says.

Through Ag Lead, Clements says she learned, “how extremely important it is for us in the ag industry to relate to the consumer that our products are safe, that we’ve invested a lot of time in the products and that we do care about the consumer to whom we are bringing these products.”

Agriculturists in Texas are not the only people who can get involved in leadership programs, thanks to opportunities such as Leadership Oklahoma, Inc., and the Kansas Agriculture and Rural Leadership Program (KARL).

The mission of Leadership Oklahoma is to “energize Oklahomans to effect positive change through a network of leadership resources.” Each year, 52 participants are selected to represent the state in the program which is built on issue-based educational programs, and there is no age requirement. Tuition for the program is $1,500, and participants must commit to attending a session each month during the program year.

In addition to the networking opportunities provided, Elaine Dodd, the director of Leadership Resources for Leadership Oklahoma and a class nine graduate, says the program educates participants more about their state and prepares them for future leadership positions.

“Through Leadership Oklahoma, I learned a lot about our state and the wonderful technologies that can be found here,” Dodd says. “The program provided more than enough information to make me better prepared for service in many different capacities.”

The KARL program is a two-year program offering intensive study, training and travel for future leaders in agriculture and rural communities. It is a private, not-for-profit organization. The program strives to enhance representation of the agriculture industry, improve participant professionalism and promotional skills, and enrich the quality of life in Kansas. Each class of 30 individuals participates in 12 trips, 10 in-state, one week in Washington D.C. and two weeks of international travel.

The participants, usually between the ages of 25 and 55, are responsible for $1,000 each year of the program for a total of $2,000. Two-thirds of participants are directly involved in production agriculture, and the remaining one-third is made up of people in agricultural support industries. Applicants interested in KARL must apply by March 15 of each odd-numbered year. According to Jack Lindquist, KARL president and director, the program helps participants to better understand the industry they are involved in.

“After participating in KARL, people will have a much better understanding of free enterprise and the business world, especially that of production agriculture,” Lindquist says, adding that participants also gain “a better appreciation for the diversity of the state.”

In order for agriculture to stay a viable industry into the next century, agriculturists must take advantage of any opportunity to expand their leadership and communication skills. If those involved in agriculture do not speak up for it, no one will.