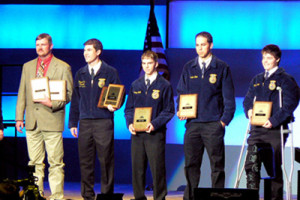 Among 46 teams from all over the United States competing for a national title, four boys from New Home, Texas, were recognized as the best livestock judging team in the nation.

“This is something these kids will always remember,” said James Tabor, agriscience teacher at New Home High School and the team’s coach. “When they look back, they will know they were the best in the nation!”

The three highest individual scores on each judging team are added to comprise the team’s total score. Three individuals on New Home’s team placed in the top 10 which contributed to the team’s success. White had the privilege of being named top high individual in the contest. Smith placed sixth, and Clem placed ninth overall.

The livestock judging contest includes a series of six classes, two in each category of three live animal species- cattle, sheep and swine. The contestants grade each class from best to worst and give oral reasons explaining why each contestant placed the class accordingly. Individuals also take a written exam covering questions concerning livestock and poultry. 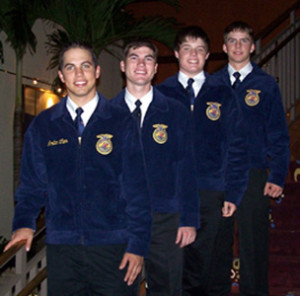 “It just proves that it doesn’t matter where you come from,” White said. “If you find something you’re passionate about, nobody can stop you from achieving your goals. We’ve had a great ag teacher and county agent that have shown leadership and given us the tools we need to excel.”

The team has been invited to compete in the international contest in Scotland in June 2009. This experience provides a two-week-long educational tour of agriculture in several countries including England, France, Belgium and Germany, not to mention a chance to compete with the top judging teams in the world. However, the team has yet to reach its $12,000 fundraising goal in order to pay for travel and contest expenses.

“Winning nationals in an event like this has opened up a lot of doors for us in the agriculture industry,” said Clem who is currently a freshman attending Redlands Community College in El Reno, Okla., on a judging scholarship. “It takes a lot of dedication to achieve the goals you have set, but if you want something bad enough you can do it.”

White is a freshman at Texas Tech University, Smith is a freshman attending Clarendon College, both on judging scholarships, and Link is a junior at New Home High School. Tabor said the hardest part is mentally convincing students they can reach a higher level if they believe in themselves.

“Just because we’re from a small town doesn’t mean we can’t compete at a higher level,” he said. “I hope we can say that we’ve got a tradition here.” Tabor said the team took the initiative and did what they knew had to be done, and he is very proud of what they have accomplished.