One of ACG’s Own Returns from Iraq 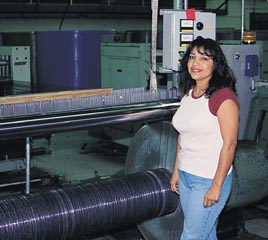 Rivera has worked as a beamer at ACG for 13 years. Photo by Whitney Peil

West Texas seems a million miles away from Iraq and the war there, but for Sergeant 1st Class Terri Rivera and her family, the war could not be closer to home.

Rivera, a native of Olton, Texas, has been a beamer at American Cotton Growers (ACG) for 13 years, but in January 2003, she left her son, 20, and daughter, 18, to help fight the war in Iraq. The 39-year-old Rivera enlisted in the U.S. Army Reserves when she was 21 because it was something very different from anything she had ever experienced.

Rivera was missed a great deal by her co-workers at ACG. Elena Pena, a beamer at ACG, said she is proud to work with Rivera.

“Terri is a confident, strong willed and determined person,” Pena said. “I am proud of her for doing her duty and ensuring that we keep the peace and freedom we love so much.” Judy Tucker, Rivera’s supervisor at ACG, said she prayed constantly for Rivera’s safety.

“We thank God Terri came home safely,” Tucker said. “It’s people like Terri who keep America safe. We all appreciate Terri and the sacrifices she made.”

“Being in the service isn’t for everyone,” Rivera said, “but it is a life changing experience.” Rivera described her living conditions in Iraq as “a little rough.”

“It was a good experience. It’s given me a new perspective on life.”Terri Rivera 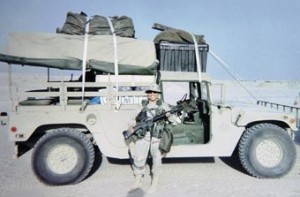 Delivering supplies was a large part of Rivera’s duty in Iraq. Photo courtesy of Terri Rivera

“We lived out of the back of our truck,” she said. “It’s kinda like camping.” There was little chance to shower at the campsites.

“We’d go a week or so without a shower,” Rivera explained. “Mostly, all we could do was a little sponge bath, and we used baby wipes a lot. That was our shower.”

The war in Iraq has been in the news for so long that many Americans may have forgotten how many of our men and women are fighting there and how dangerous it is for them.

Rivera faced several scary moments including maintaining crowd control after Saddam Hussein’s sons were killed by American troops. The scariest time, though, happened while she was driving her truck in a convoy.

“I was driving the truck when I saw a package in the middle of the road,” Rivera said, “and I just made a split-second decision to straddle it. The Iraqi taxi behind me didn’t, and it was blown up by a bomb in the package.” She said caution and common sense are the two things that help keep U.S. troops safe in Iraq. 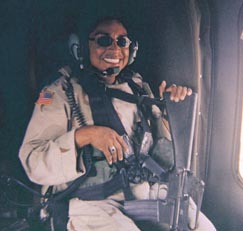 Helicopter travel is a frequent occurrence during wartime. Photo courtesy of Terri Rivera

Rivera worked mainly as a liaison between the military and the Iraqi people. Her job was to assist the Iraqi people in establishing a new government and help them recover from the effects of the war. Her company also assisted with reconstruction of buildings that had been damaged during the war. She said it was rewarding to see the Iraqi people and their government become more independent.

“For the Iraqi’s to see a female in charge was difficult for them,” Rivera said. “But I think we made the Iraqi women feel stronger when they saw us [women] taking charge.” Rivera believes the majority of the Iraqi people are supportive of American troops.

“From the people I talked to, and the contacts I had,” she said, “the civilians were glad to have us there.” Rivera knows not all Americans are supportive of the war, and she understands how they feel, but she wishes they would change their attitudes.

“Don’t fight the war effort,” she said. “We’re there, and we’re not leaving anytime soon. Whether you like it or not, don’t complain, just pray.” Rivera is proud of the year she spent in Iraq.

“It was a good experience,” Rivera said with a smile.” It’s given me a new perspective on life.”