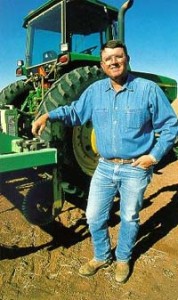 As a result of his selection, Smith and his wife, Jennifer, attended the Beltwide Cotton Conference in San Diego, CA, Jan. 5-9, and were honored during a special High Cotton recognition breakfast. The annual honors program is sponsored by the Cotton Foundation, Memphis, TN, and administered by Farm Press Publications/Southwest Farm Press.

The High Cotton program focuses on a farm’s profitability, environmental stewardship and cultural methods used in reaching those objectives, according to Southwest Farm Press. Priorities in Smith’s farm operation include environmental and employee safety, resource conservation and overall efficiency. To gain insight on new innovations and procedures, Smith considers ideas from university meetings, magazines and other farmers.

Smith’s operation consists of FC Farms, a partnership between Smith and his father Ed, and E&B Farms, a corporation including Ed, Eddie and Eddie’s son, Eric. The entire operation totals 3,700 acres in Floyd and Crosby counties with 3,000 acres in cotton production. The remaining acreage includes 500 acres of sorghum and 200 acres of dryland wheat.

Cotton raised under the center pivot systems is producing approximately 750 pounds of cotton per acre, according to Smith. Remaining row irrigated cotton is yielding 500 to 600 pounds per acre.

Each tractor in Smith’s operation uses a radar device to verify ground speed and to set and monitor each chemical application. This ensures proper application rates of pesticides and fertilizers. “We won’t apply anything without spray control,” Smith says.

The cotton crop is established and maintained with the fewest possible trips across Smith’s fields to conserve energy resources and reduce soil compaction. Cotton stalks from the previous season are left standing in the field, and virtually all nitrogen for the crops is applied through the center pivots. “We make as few field trips as we can,” he says.