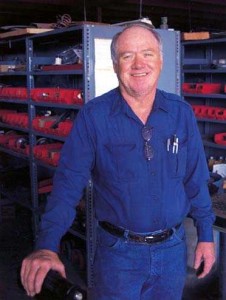 Petersburg farmer Ronnie Hopper is always smiling, but under this easygoing exterior is a man that is fighting for West Texas cotton producers. As president of Plains Cotton Growers (PCG), he is no amateur when it comes to issues that affect cotton growers.

“Three main issues have been working against West Texas cotton producers,” Hopper said. “First is the drought that has scorched West Texas for three years. Another is low prices producers are receiving for their cotton, and the most recent issue is high energy costs,” he continued.

“Cotton prices are at 20-year lows and the high cost of energy affects all farmers,” he said. “Irrigating is expensive, and energy costs impact dryland farmers, too, because natural gas is used in the production of nitrogen fertilizer.

Hopper stated that cotton production on the Texas High Plains historically has flourished as a result of three factors working in favor of the producers: good weather, good prices and affordable energy.

“If things don’t get better, these issues could change the face of agriculture in one of the most productive growing regions in Texas,” he said.

Hopper has attended a number of legislative committee meetings in Austin and Washington, D.C., this year monitoring and discussing issues such as natural resources, rural development and water. He spends a significant amount of time and energy preparing, attending and thinking about these meetings. With all the time Hopper spends helping cotton producers, he needs a little help caring for his farm while he is away. Therefore, his employees, Tomas Resendiz, Francisco Feregrino and his youngest son, R.N., operate the farm in his absence.

In early February, Hopper testified before the Texas House of Representatives Committee on Energy Resources. He discussed the serious effects that skyrocketing natural gas prices are having on Texas cotton producers. He said the high energy prices eventually will affect everybody, but the first to fall will be those with fixed incomes and those that use significant amounts of energy and are unable to pass on the additional cost in the goods they produce.

“Cotton producers from PCG’s 25-county area fit into both of these categories,” said Hopper. Citing utility costs for irrigation that comprise more than 28 percent of the total farm budget, Hopper told the House committee that with energy costs doubling, he and many others may not be able to continue farming. These are strong words coming from a seventh generation farmer of 32 years. 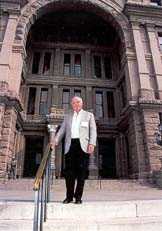 Hopper at the south entrance of the State Capitol.

Hopper stated that two long-term issues will be discussed in Austin this legislative session. They are the re-districting that likely will cause West Texas to lose representation and the ongoing water issue. He said arguments over water issues started in the last legislative session and could go on for at least 20 years.

He said that federal legislators only address issues that need immediate attention. At this time, agriculture certainly fits into this category. PCG recommends a three-step program designed to bring short-term relief to West Texas cotton growers. The first of these issues is the Crop Disaster Program. PCG would like the program to include compensation for severe economic loss. Currently, the program only compensates for damage to crops in terms of quality and quantity.

PCG also would like to see authorization for a second Agricultural Marketing Transition Act (AMTA) payment at the 1998 rate of 8.17 cents per pound instead of the lower 2001 rate of 5.99. Also, the base loan price of cotton is too low, and PCG would like to increase it by 20 percent. This would increase the rate to about 60 cents per pound.

Finally, PCG would like to develop a voluntary land resource conservation program that would provide producers with an incentive to set aside a portion of their acreage in exchange for payments based on a fixed payment schedule.

Hopper said, “The goal of Plains Cotton Growers is to come to the point where every grower in West Texas can say ‘PCG is my producer organization and I am happy they are representing me.'”

Since he began farming in Petersburg in the early 1970s, Hopper has been a supporter and member of PCCA. He is a past delegate body member at PCCA and a member of the Petersburg Coop Gin Board. He said being a part of PCCA also has helped him represent cotton growers.

“Texas has a good number of people representing them in Washington, D.C., and Austin” Hopper said. “Van May, PCCA president and chief executive officer, is one of those that is always working hard for the interests of West Texas cotton producers.”

Born and raised in Petersburg, Texas, Hopper graduated from Texas Tech University with a bachelor’s degree in agronomy in 1969. Hopper and his wife, Nena, have four children.

Hopper’s brother Norman is associate dean for Student and Alumni Affairs at Texas Tech University as well as associate chair and piper professor of seed physiology. He also is a member of PCCA.