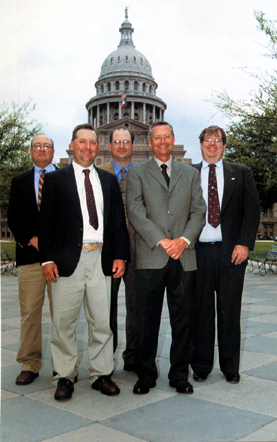 The 79th Texas Legislature closed the doors on its regular session at the end of May, and the state’s agriculture industry emerged “in relatively good shape,” according to one observer.

“Debates over many bills that could have affected Texas agriculture ensued during the five-month session, and contrary to many people’s concerns, we held our own,” says Tommy Engelke, executive vice president of the Texas Agricultural Cooperative Council (TACC).

After state public school financing was ruled unconstitutional last fall by District Judge John Dietz, the legislature made public education overhaul a priority. The two bills introduced would have provided more money for public schools by modifying existing taxes such as the state’s franchise tax. Since 1971, agricultural cooperatives have been exempt from paying the franchise tax; however, legislators discussed doing away with this exemption and others. Although the House and Senate did not reach an agreement the regular session, legislators continued working to improve public school funding.

“Losing the franchise tax exemption would be a terrible blow to cooperatives,” Greg Taylor, a partner at D. Williams & Co., P.C. in Lubbock, says. “The money would come right out of farmers’ pockets.”

After hours of laboring by many individuals, cooperatives let out a collective sigh of relief when the modification to the franchise tax was taken off the table. The legislature also considered new payroll, surplus or gross receipts taxes for many businesses to help fund public education. Alterations to other taxes also were recommended while sales tax and taxes on services were examined as possible revenue sources for education.

Although no decision was reached, public school funding remained a top priority, and Governor Rick Perry called a special session of the legislature beginning June 21 to find a solution. Workers’ compensation reform also was under consideration during the regular session, and unlike school finance reform, it was passed. The last major change occurred in 1989.

Currently, the Texas Workers’ Compensation Commission has six commissioners, but under the final bill, the workload of these commissioners will be transferred to the Texas Department of Insurance. For workers’ injuries, doctor or managed health care networks similar to PPO providers will be set up. Engelke says this will be a better way to manage the system and will be beneficial to both employers and employees.

“This will bring rates down and give injured employees access to more of the doctors they want to use,” says Engelke. He also says there has been a history of employees abusing workers’ compensation, and this bill will cut down on those violations which, in turn, will save employers money.

“Senate Bill 3 was a voluminous piece of legislation introduced late in the session,” says Jim Conkwright, general manager of the High Plains Underground Water Conservation District No. 1. “Because of this, some stakeholder groups did not have an opportunity to provide input on the proposed legislation.”

Early on, municipalities opposed a “tap tax” to provide funding for water infrastructure in Texas. The first 5,000 gallons of water sold to a consumer by a retail public utility would have been exempt from the fee. Then, each 1,000 gallons of water used thereafter would have been subject to a 13- cent-per-gallon-fee. It was estimated by the state legislature that this would have cost the average household an additional $1.41 per month. Several municipalities throughout the state opposed this portion of the bill, and the language was removed. However, it may be reconsidered in future legislative sessions.

At the end of the session, several of the objectionable portions of Senate Bill 3 were dropped, and House Bill 1763 was passed as a compromise to the GMAC provisions in SB3. “House Bill 1763 sets down uniform rules and procedures for ground water conservation districts,” says Conkwright. “It also provides for joint water planning among districts. This is much less intrusive and a more practical approach than the proposed language in SB 3.”

One of the more controversial bills in the legislature concerned the Trans Texas Corridor to help reduce congestion on major highways in the state. The proposed corridor would be a 1,200-feet-wide “mega-highway” from North Texas to Mexico and could be completed in 50 years. As proposed, it would be a toll road that would consume more than 580,000 acres of Texas land, and its construction and management would be contracted to an individual firm.

Many Texans were concerned that letting an individual firm build and maintain the highway would give it too much power regarding the toll prices and condemning private land, but others said it was a good idea because the corridor would be built much faster with private funding.

Meanwhile, some legislators said it would be more cost efficient to build another road running alongside I-35. According to TACC, commissioners courts in 25 rural counties had passed resolutions opposing the plan as of May 2005.

From the aspect of trade, the corridor would be beneficial. Goods would be moved much faster than they are now on I-35, but this mega-highway would take an astronomical amount of land from farmers, ranchers and other property owners.

Due to those concerns and outright opposition to the corridor, bills were filed during the legislative session to slow the process, essentially creating a two-year moratorium for more research to be conducted.

“The success we achieved in this session was a product of the groundwork we started years ago,” Engelke says. “We knew these issues were going to come up sooner or later, and we were ready for them.”