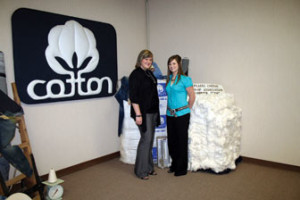 With the increase in enrollment and tuition, funding for Texas Tech University students has become more difficult. However, for two young agriculture majors this burden has become a bit easier.

The Howard Alford Memorial Scholarship was endowed in 1974 by PCCA’s Board of Directors in memory of the cooperative’s former chairman of the board. This honor goes to top Texas Tech students pursuing a degree in agriculture and is based on students’ high school record, SAT or ACT scores, grade point average and financial need. The most recent scholarships were awarded to Sydney Pierce and Skylar Sowder for their excellence in academics.

Pierce grew up in Lubbock, Texas, and graduated from Monterey High School in 2009. She is now a freshman animal science major specializing in management and production.

After spending her childhood on her grandfather’s farm near Meadow, Texas, she came to love animals and knew she always wanted to work with them. Her former Saddle Tramp father inspired her to be a Red Raider from a young age.

“My favorite thing about being a Red Raider would have to be all the traditions we have,” Pierce said. “I think it’s really cool that Tech has so much school spirit. To me, this scholarship means that I can pursue my dreams and goals,” Pierce added. “I know that I wouldn’t be able to accomplish half of what I have planned in the future without the help and support that I’ve received through being awarded this scholarship.”

Skylar Sowder, also growing up in an agricultural environment as the daughter of a cotton farmer, now majors in agricultural and applied economics.

“I have been a Red Raider fan for as long as I can remember,” Sowder said. “I also chose Texas Tech because of the financial support they were willing to give me in the form of scholarships.”

“I have been a Red Raider fan for as long as I can remember,” Sowder said. “I also chose Texas Tech because of the financial support they were willing to give me in the form of scholarships.”

“My favorite thing about being a Red Raider is the small town feel even though I go to a large school,” Sowder said. “I really feel at home at Tech and especially in the College of Agriculture. Everyday, I come in contact with smiling faces among my fellow students as well as professors and staff within the university.”

After growing up in Sudan, Texas, Sowder has enjoyed her transition into college life and is excited about the opportunities her major in agricultural and applied economics will give her.

“This scholarship is more than just dollars,” Sowder said. “It is opportunities knocking at the door.”