Wally and Margy Darneille Have the Blues 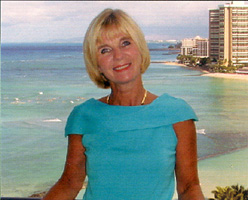 Baseball and apple pie have been long-time symbols of Americana, but cotton soon may join the ranks as a symbol of American life. A simple denim shirt might be the key.

Wally and Margy Darneille of Montgomery, Ala., became increasingly concerned about the U.S. textile industry and decided Americans needed access to all- American, all-cotton products. They realized a great number of textile jobs were moving offshore, and it was becoming difficult to find American-made apparel. With their connection to the cotton industry, they felt they should do something to help.

“We’re just trying to save the textile industry one shirt at a time,” Margy said. Wally is senior vice president at Weil Brothers Cotton, Inc., and last year, he and Margy spent time speaking with PCCA President and CEO Van May about the decline in the U.S. textile industry.

“Van is a remarkable thinker and leader,” Margy said. “He very simply outlined a problem that seemed to have eluded us.” May stressed the need to support U.S. textiles and inspired the Darneilles to begin researching products that were 100 percent cotton and made in the United States.

Currently, consumers can purchase the blue denim shirts in men’s sizes. The shirts are available in both long and short sleeve styles. The All American, All Cotton logo is located above the pocket. Soon, the Darneilles hope to produce the shirt in women’s sizes.

“We are starting small,” Margy said, “but we hope to grow to the point that the public will take notice of the importance of supporting the U.S. textile industry and our farmers.” The Darneilles credit their love for the cotton industry and their patriotism for the birth of the All American, All Cotton company logo.

“Our business is a combination of loving the cotton industry and loving our country,” Margy said.

“We certainly cannot stem the tide of textile jobs flowing offshore,” she said, “but at least we may be able to preserve some pride in the ‘made in America’ concept.”